Dutch fashion designer Mattijs van Bergen and spatial designer Oeri van Woezik presented their Amsterdam Rainbow Dress in collaboration with COC Amsterdam. The unveiling took place on Friday, August 5th, at COC’s Shakespeare Club in the Amsterdam Museum. The dress, measuring over 50 feet, features the flag of the City of Amsterdam and the flags of 72 countries where ‘homosexuality’ is still punishable by law. The dress emphasizes the importance of openness and inclusivity that Amsterdam offers to LGBTQI people. Model Valentijn de Hingh presented the dress and photographer Pieter Henket made a promotional photoshoot at the Rijksmuseum, in Amsterdam.

The dress is a co-creation of fashion designer Mattijs van Bergen and spatial designer Oeri van Woezik. The dress incorporates the national flags of 72 countries where homosexuality is still penalized under criminal law. The body of the dress features the flag of the City of Amsterdam, emphasizing the importance of Amsterdam to remain open and inclusive to LGBTQI-refugees who are persecuted because of their sexual or gender identity. “The idea came up spontaneously when the flags that were part of the Pride Walk were offered to us. With this dress we wanted to translate the international message of the flag parade during Pride Walk / Pink Saturday to a local statement of community and connection in Amsterdam”, says Arnout van Krimpen of COC Amsterdam. 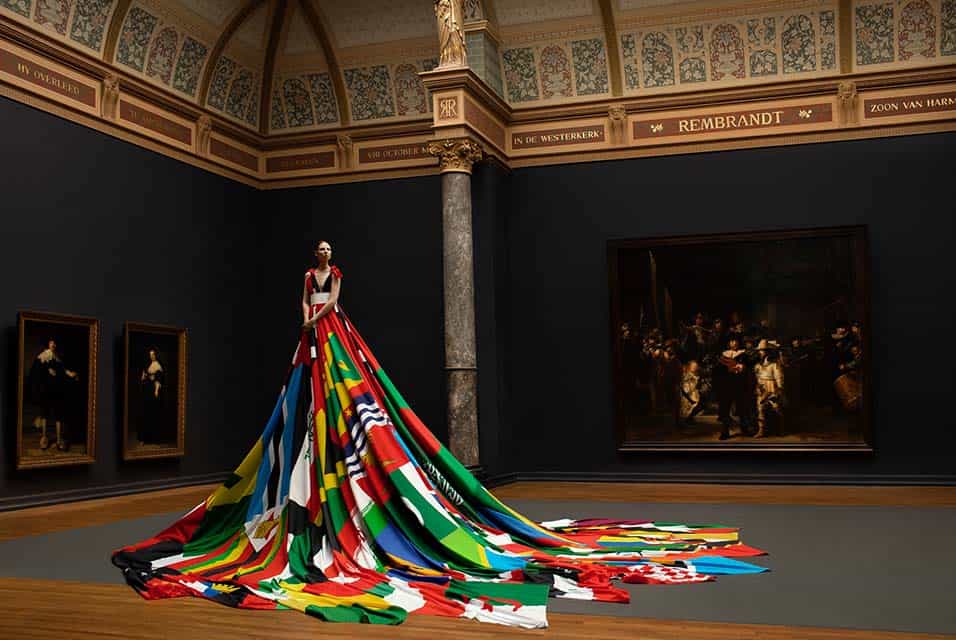 Van Bergen and Van Woezik stress the importance of freedom of expression: “Being allowed to be yourself, doing what you feel is right, is essential for personal happiness and development. It is truly worrying to see that freedom of love and expression is still restricted in so many countries. Gay pride is not just about parties and celebration, it also offers momentum to make clear what is of universal importance to all people.”

The Amsterdam Rainbow dress will become part of a yearly ‘Amsterdam LGBTQI Freedom Ceremony’ during Amsterdam Gay Pride. At the ceremony the flags of countries where homosexuality has been removed from criminal law will be replaced by rainbow flags. Flags of any new countries who criminalize homosexuality will be added to the dress.

Throughout history Amsterdam has been a ‘shelter city’ for people who were not safe because of their ideas or who they were. “Amsterdam as ‘safe haven’, even for LGBTQI refugees, is not something that ‘exists’ spontaneously. Openness and inclusivity needs to be actively supported and upheld by the citizens of Amsterdam from a shared understanding of equality for all”, says Peter de Ruijter, chairperson of COC Amsterdam.